Roomful Of Blues at Regattabar 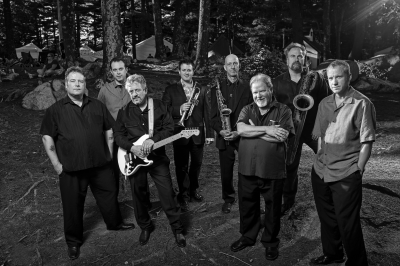 Even though Roomful of Blues' lineup has changed over the years, the band has always been one of the tightest, most joyful blues ensembles in the world. Currently an eight-piece unit led by guitarist Chris Vachon, the band has never sounded fresher or stronger. In 2010, singer Phil Pemberton took over the vocal duties, bringing his sweet and soulful vocals and adding another bright new dimension to the jazzy, jump-blues musical roots. Their winning combination of jump, swing, blues, R&B and soul remains their calling card, as does their ability to fill the dance floor. Along with newer members, bassist John Turner, trumpeter Doug Woolverton, drummer Chris Rivelli, and keyboardist Rusty Scott, and longtime members baritone and tenor saxophonist Mark Earley, tenor and alto saxophonist Rich Lataille , Roomful keeps on rockin' in 2015. ...

Even though Roomful of Blues' lineup has changed over the years, the band has always been one of the tightest, most joyful blues ensembles in the world. Currently an eight-piece unit led by guitarist Chris Vachon, the band has never sounded fresher or stronger. In 2010, singer Phil Pemberton took over the vocal duties, bringing his sweet and soulful vocals and adding another bright new dimension to the jazzy, jump-blues musical roots. Their winning combination of jump, swing, blues, R&B and soul remains their calling card, as does their ability to fill the dance floor. Along with newer members, bassist John Turner, trumpeter Doug Woolverton, drummer Chris Rivelli, and keyboardist Rusty Scott, and longtime members baritone and tenor saxophonist Mark Earley, tenor and alto saxophonist Rich Lataille , Roomful keeps on rockin' in 2015.

PHIL PEMBERTON
As leader of his own bands for the last 20 years, this Massachusetts native has found himself playing to intimate clubs all the way to large festivals, throughout the US, England, France and Canada. In addition, The Philip Pemberton Band was also the 1stWestern band to play in the former capital of China, Xi'an on a 2 week tour broadcast to ½ a billion people throughout Asia.We welcome him as the newest, in a long tradition of fine Roomful of Blues vocalists

CHRIS VACHON
Chris is a true multi-talent. His prowess as a guitar slinger is well documented, and his strengths as a producer and songwriter grow from album to album. He produced the band's six most recent albums--There Goes the Neighborhood (1998), Watch You When You Go (2001), Live at Wolf Trap (2002) the Grammy nominated That's Right! (2003), and Standing Room Only (2004) and "Raisin' A Ruckus" (2008) after co-producing all of Roomful's other albums recorded in the '90s. Chris' songs--such as "Turn It On! Turn It Up!," "Running Out of Time," "She'll Be So Fine," "Blue, Blue World," and "Dynamite"--have become firm favorites in AAA and blues radio formats, bringing many new fans into the Roomful fold.

JOHN TURNER
A veteran of the New England jazz scene, bassist John Turner has performed and recorded with just about everybody-specifically the Either/Orchestra,Charlie Kohlhase, Scott Hamilton, Roswell Rudd, Lee Konitz, the Tommy Dorsey Orchestra, members of Ornette Coleman's band, and , Magic Dick-Jay Geils and Blues Time to name a few. John's rock solid bottom is the essential element of the swing groove which Roomful is renowned for.

RUSTY SCOTT
Rusty Scott has been a fixture on the Boston jazz and blues scene for a number of years now. He began playing piano at the age of eight. His jazz studies began with Burlington jazz musician, Bruce Sklar, while attending the University of Vermont. In 1989 he attended Berklee College of Music. Rusty also plays Hammond B3 organ and in addition to being a member of Roomful of Blues he currently heads up the Rusty Scott Organ Group, playing major venues throughout Boston and New England. Rusty's solid rhythm, driving piano solos, and howlin' organ riffs are a first class addition to the "Roomful Tradition".

CHRIS RIVELLI
From Boston Massachusetts, Chris has spent many years as a touring drummer with blues artists from the East Coast, West Coast, and Chicago, including Duke Robillard, Janiva Magness, John Nemeth with Kid Andersen, Nick Moss and The Fliptops, Lynwood Slim, Ron Levy, and Toni Lynn Washington. He has played on recent recordings by Junior Watson, Sax Gordon, The Matthew Stubbs Band, Gina Sicilia, and The Get Backs. Chris is a former student of legendary drum instructor Alan Dawson, and a graduate of Berklee College of Music. He is a long-time endorser for Vater Drumsticks. "Aiming the beat at thier feet", Chris's solid swing and shuffle rocks in the Roomful tradition.

RICH LATAILLE
Rich joined Roomful in 1970 and was there at the beginning of what has become the most legendary horn section in contemporary blues. It was Rich's interest in the swinging bands of the '30s and '40s that led Roomful to forge the distinctive sound that has become the band's trademark. A man who can play both sides of the fence, lyrically tender or blisteringly hot, Rich has a big, warm tone that is always jam-packed with feeling. His melodic inventiveness reflects the depth and breadth of his wide-ranging influences. Rich worked with various local and high-school bands before beginning his long-term relationship with Roomful.

MARK EARLEY
Mark names Sonny Stitt as his main man, with more than a nod to Sonny Rollins and Dexter Gordon leading him to Lester Young and an appreciation for the depth and history of the music. As a longtime fan of Roomful of Blues, and their like respect of the tradition, he has finally arrived home. His tone, ideas, deep bottom and charismatic stage presence further burnish what is already a legendary horn section. Memorable performances include shows with Jay McShann, Albert Collins, Louis Bellson, Joe Williams, Jerry Portnoy, Johnny A., Barrence Whitfield, Lee Konitz, The Coasters, The Temptations, Chuck Findley, Wayne Newton, Jo Ann Castle, Dallas Jazz Orchestra, and the Rudy Scaffidi Orchestra.

DOUG WOOLVERTON
With A Bachelor of Arts in Trumpet performance, Doug is one of the bright young lions of the trumpet world. . His performing experience includes jazz and blues, as well as classical music. Depending on the tune, you'll hear influences ranging from Miles Davis, to Louis Armstrong. Doug plays cool and hot, high and low; swinging all the time, while dazzling audiences with his blues based jazz styles. Doug has performed with The Temptations , Allen Vizzutti, Peter Olstad, Greg Wing, Derek Gardener, Rodney Lancaster, Dominic Spera, Vincent DiMartino, Jon Faddis, Carl Saunders, Richie Cole, The Dominant7, The Army Blues Rhythm Section, and was a three-time finalist at the National Trumpet Competition in the solo jazz division.

About Roomful of Blues

Prize: Outside In Music CD and Digital Album Giveaway!

Sponsored by Outside in Music

Get more of a good thing

All About Jazz needs your support

Donate
All About Jazz & Jazz Near You were built to promote jazz music: both recorded and live events. We rely primarily on venues, festivals and musicians to promote their events through our platform. With club closures, shelter in place and an uncertain future, we've pivoted our platform to collect, promote and broadcast livestream concerts to support our jazz musician friends. This is a significant but neccesary effort that will help musicians now, and in the future. You can help offset the cost of this essential undertaking by making a donation today. In return, we'll deliver an ad-free experience (which includes hiding the bottom right video ad). Thank you.

Get more of a good thing

Join Our Community / Welcome Back!

One moment, you will be redirected shortly.

Welcome to All About Jazz!

We sent a confirmation message to . Look for it, then click the link to activate your account. If you don’t see the email in your inbox, check your spam, bulk or promotions folder.

Thanks for joining the All About Jazz community!

Explore All About Jazz & Jazz Near You

Search Jazz Near You


or search site with Google

View events in other cities

All U.S. Cities All World Cities

All About Jazz musician pages are maintained by musicians, publicists and trusted members like you. Interested? Tell us why you would like to improve the musician page.